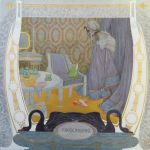 As the movement expanded into children's book illustration, many Austrian and German illustrators became identified with these innovative, highly decorative and finely produced children's books. The name, Jugendstil ("youth style"), was taken from the periodical "Jugend" which began to publish artists in this field such as: Heinrich Lefler, Joseph Urban, Hans Heinrich Christianson, Hugo Hoppner, Ernst Barlach, Peter Behrens, Julius Klinger, Heinrich Kley and a host of German and Austrian illustrators of children's books. Today, these books are highly prized, quite rare, and seldom found in collectible condition.